Although its understandable that Time Machine may slow the Mac in some way because the Mac is more busy backing up, the performance 'hit' is usually negligible.

In any case, this situation can be confirmed by opening the Activity Monitor app (resident in the Utilities folder) and viewing which processes are using the most memory. 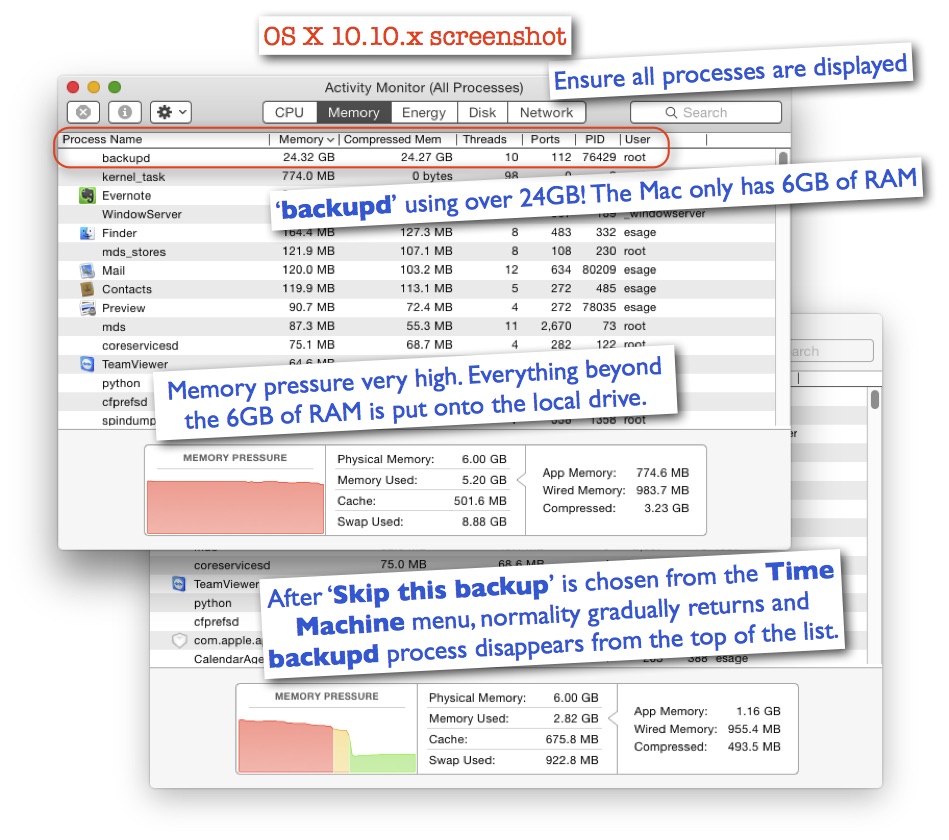 If lots of memory is used up and the process called backupd is near or at the top, then this probably confirms the issue. Activity Monitor will likely show more memory used up than your Mac has as RAM. This is because the Mac will have used the local drive as RAM. Using storage as RAM slows the Mac considerably.

Assuming getting the Mac working at a tolerable speed is more important than saving all the cached backups on your local drive since when it worked last, the instant fix is to choose Skip this backup from the Time Machine menu. Gradually, memory will then be freed up and the Mac will return to full speed again.

If it is only a temporary glitch, immediately choosing Back Up Now from the Time Machine menu, ought not make the issue reoccur.

A call to the eSage helpdesk from one frustrated user was quickly resolved. The user couldn't log in to their computer. Preliminary questions ruled out they were punching the wrong keys for the password, so I was a bit mystified and hoped it wasn't going to be a a difficult task involving booting into recovery mode etc.

Fortunately, I had direct access to their Mac remotely so could see their login screen.

I could then see the caps lock key was turned on. Once I explained the on-screen symbol for this and what the key does, problem solved! 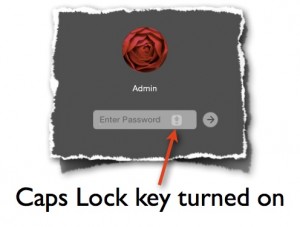 A customer’s iMac was running exceedingly slow. It was one of the older models (20-inch Mid 2007) still capable of running Yosemite.

The Mac was found to be using over 5 GB of memory before it even loaded any apps other than the Finder. With only Yosemite loaded, perhaps around 1.5GB of memory should be used – certainly not the more than 5GB. Too little RAM was left for productivity apps so that almost anything the user did meant apps and data were being shuffled back-and-forth between the RAM and much slower HDD. 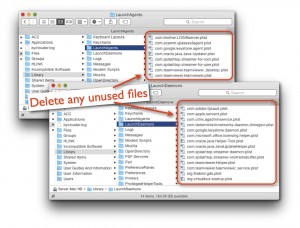 A quick check revealed lots of legacy services loading that busily check the drive while consuming memory. These weren’t in the obvious places like startup items in the System Preferences but buried in the Library folder. Once these were removed, normally almost returned. 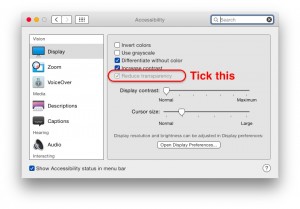 Yosemite still slows older Macs down significantly anyway and this was no exception. Older Macs like this can’t afford the luxury of running Yosemite’s eye candy – especially true for models with entry-level graphic capability. Therefore, Translucency was the first thing to be turned off.

To give it a performance boost, the RAM was upgraded to 6GB (Officially, it only takes up to 4GB but 6GB works) and the internal 250GB hard disk was swapped out with a much faster 1TB SSHD (Basically being a conventional HDD but with 8GB of RAM).

These economical upgrades allowed the iMac to be revitalised.

If you’ve an older Mac that can have RAM & storage upgrades, then perhaps it’s a good idea to go with the upgrades, but remove those unnecessary software services first.

Refer attached edited screen shots. Messages like these occasionally  arrive in my mail. Each message can be confirmed as a scam in the Mail app by placing the cursor over the link the user is expected to click on and just waiting a few moments. A box appears displaying the destination for the link which, in this case, is not apple.com. There are other anomalies in the message but a hurried user may not notice them. 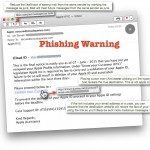 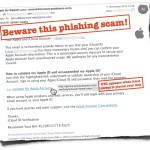 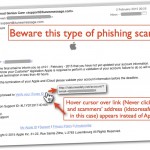 It’s best users be aware of this type of ‘phishing’ scam whereby crooks send deceptive messages to get unsuspecting users to enter their account access details into a webpage that presumably looks like (in this case) Apple’s real website.
Once the crooks have the user's details, depending on what the Apple account is used for, the crooks could cause havoc for the user's life and business.
We can expect the scams to get more and more believable over time. If some site is asking for your account details, consider it suspect until proven innocent. One way to reduce the risk of falling victim is to NOT intuitively and casually click on links from messages unless you trust the source because it won’t always be harmless to simply load a website. Some links can be personalised so that the crooks will know which user’s address simply opened the website, even if nothing was entered into the page, which will then confirm for the crooks that the address is a legitimate one and that the user is keen to hit those links. Such users would likely then be targeted more.
In recent months Apple has improved its security measures that are available to users to reduce risk of others accessing the account. Some of these security changes are passive in that we need not make changes ourselves, but the best protection means we need make some active choices about the account.
Much of Apple's security overview may be found from this link: http://support.apple.com/en-us/HT202303
The page mentions 2-step verification which eSage recommends be turned on if the account is an important one.