Having worked with many medical institutions, eSage can safely say it has more patience than most doctors 🙂
Even eSage finds the breakneck speed of IT advancement difficult to keep up with, so sympathises with others who have inadequate time or motivation to grasp the new technologies for themselves. For this reason we have plenty of time for the customers – letting them do only what they want to do or learn at a pace that suits them. 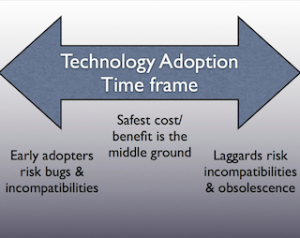 eSage believes that simplicity is best and it would be great if the world could operate without the confusion that comes with IT services. eSage is a complete critic of IT but recognises that the benefits it brings can out-weigh the cost of implementing it.
Before we suggest a change, we weigh up the cost versus benefit of that change and make sure the customer has reasonable expectations of final results.

In general, eSage loves to keep abreast of the latest changes but, for customers, where there is serious risk of downtime, avoids implementing the leading edge of technology knowing that it usually is rife with (A) the highest bug incident rate and (B) technologies too new to be integrate well with existing services. Furthermore, the trailing edge of technology is also to be avoided as it, too, develops its own list of incompatibilities as its fails to keep up with the current norms. Failing to upgrade technology before it becomes obsolete can mean the window of opportunity to easily upgrade may disappear.

For these reasons, it is generally best to aim to keep the IT service technologies in a range no earlier than about 6 months from any initial industry adoption. Let the keen early adopters report the bugs for fixing so by the time you've started using it, the service works as best as can practically be.